From ArduinoInfo
Jump to: navigation, search
print this page

Learning about Arduino can be challenging if you are a beginner. Connecting the different components correctly can seem daunting especially if soldering is required. But, there is an easier solution that allows you to experiment, learn and rapidly prototype projects with ease and safety. It is called the YourDuino Electronic Brick Set. In the YourDuino.com shop HERE.

The Electronic Brick Set is a great place to start learning about Arduino and you can learn to build many interesting projects. The Bricks are small circuit boards that hold components like push-button switches, light and temperature sensors, LEDs etc. (See photo upper right). They are easily connected to the Arduino or Arduino-compatible microcomputer using a Plug and Play system of components. The Sensors and Actuators connect together easily and can be reused. No soldering is required! Each Brick has a 3 or 4 pin connector that wires easily to Ground, Voltage (Vcc) and the Signal to the Input or Output device. 3-pin cables or sections of flat cable make it easy to connect them.

Electronic Bricks are especially good for classroom situations where you'd like to be really sure wiring connections are correct and then be able to concentrate on designing software sketches and higher-level systems. See them all HERE (but continue on this page if you are ready to start using the set or want to follow our tutorials.)

What do I need to know about Electronics??

This is the picture we will be looking at in most of the next real projects:
external image many-in-out.jpg
Arduino has many connections (PINS) that can be used as INPUTS or OUTPUTS. Usually we will use PINS numbered from 2 to 13. (There are also other pins we will talk about later).
Arduino has a nice feature: You can decide which of the PINS are INPUTS or OUTPUTS and you'll learn how to do that in a couple of minutes.
Time to look at The YourDuino RoboRED MicroComputer that comes with the Electronic Brick Set. It is an Arduino Derivative that is a legal variation of the original Open Source Arduino designs. Take a good look and then we'll figure out what's there. Then we'll hook it up and make it work. 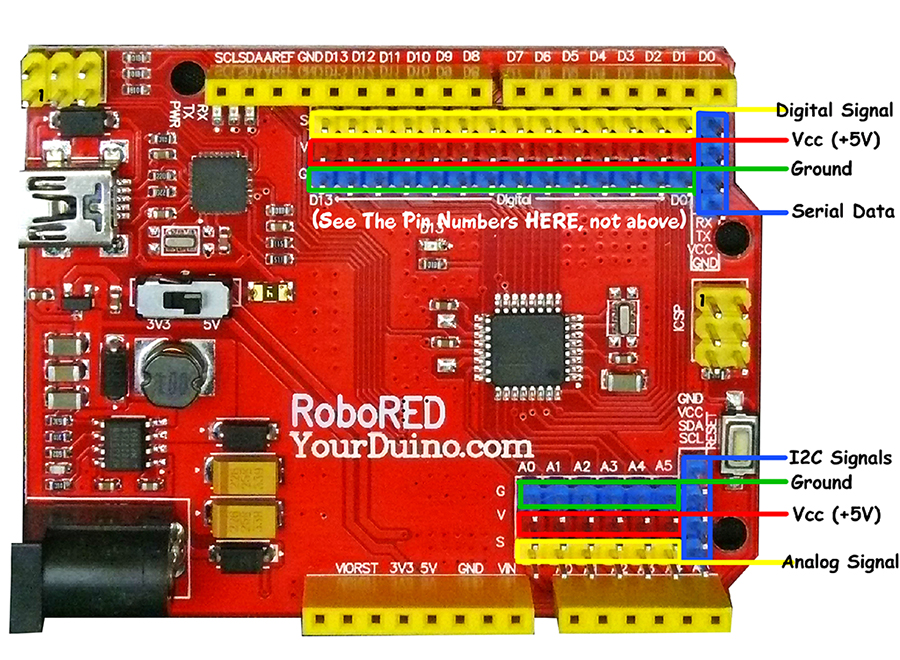 Take a couple of minutes and look at this closely. You don't need to know what the stuff on it IS, yet. Get coffee or tea. Slow down. Just look.

Often people connect to Arduino by plugging wires into the pin holes in the yellow connectors at the very top and bottom of the photo. That works OK, but you will have it easier because the RoboRED has added 3-pin connectors on every Input and Output pin. This means you can simply plug in the 3-pin cables that come with the set, and plug different Electronic Bricks on to them to get things connected fast.

If you have not used Arduino boards before then you need to get the free Arduino software downloaded and the RoboRED basically running. Let's DO that!

You should always get the latest Arduino Software from the Arduino website.

Now, click on the link to the following page that is right for your computer and operating system (Go through all the "driver install" and checkout parts of those pages):

Then come Blinkin' Back Here!

Over on the right, the ON LED should be lit . And in the middle, the "D13" LED should be blinking (usually Red). (Unless you already downloaded some other software SKETCH to your Arduino.)
Most Arduinos have an LED and a resistor permanently connected from Pin 13 to GND so you can blink it easily.

You will read a LOT of program "Code" that other people wrote, in the future. You HAVE to "Watch Closely Now" and really see the details. Read the example (above) through carefully, a couple of times. Note the colored special words that are INSTRUCTIONS.
INSTRUCTIONS: Are unique words that tell Arduino what to do.

What SETUP does: Instructs Arduino about things that need to be done once at the beginning. Remember that Arduino Digital Pins can be either INPUT or OUTPUT. You have to tell Arduino when a Pin will be used as an OUTPUT. In this example, there is one line that tells Arduino that Pin 13 must be an OUTPUT.
external image Arduino-IDA-Pinmode1.jpg

Note the COLOR of the lettering. The Arduino IDE changes the color of words as it recognizes them as special instructions.

pinMode: Note that when Instructions are two words run together, like pinMode, the beginning of the SECOND word is Capitalized. Mess with it: Change the Capital "M" to "m". Note the color changes to black. Hmmm. Click the VERIFY Button:

Fussy, Fussy, Fussy! Yep, every letter has to be recognized.
Change it back. Check the color. Click Verify again. OK??

A lot! More details later, but Verify is a program in your main computer that Builds the code to be uploaded to your board. It goes through every Instruction in your Sketch (Ignoring "Comments") and checks it against the list of valid Instructions, and checks that the structure and sequence of the statements in the Sketch are correct. Fussy, Fussy! If that's OK, then it "compiles" or "translates" the sketch into the machine code that Arduino actually runs on. It saves that 'ready-to-run' code for you to Upload to Arduino and run.
What does UPLOAD do??

First, Upload runs Verify to check and compile your program. Then it communicates to your Arduino over the USB connection, resets the Arduino chip, and talks to software already on Arduino (called the BOOTLOADER) to load your new program into the Arduino's memory. Then it restarts Arduino and your program runs it's SETUP section and then repeats the LOOP section.

The LOOP section of your program does all the instructions in the section, and then "loops" back to the top and starts it again, over and over.
NOTE: the "Brackets" { and }
Notice that the beginning and end of the section is "inside brackets". You will see many sections of bigger programs that are grouped by these "brackets".
Now, let's look in detail at the instructions:
digitalWrite
This instruction sets an OUTPUT PIN to either HIGH (connects it to +5 V) or LOW (Connects it to GND). Remember: HIGH = 1 = ON = 5V
So, the first line in LOOP sets PIN 13 to HIGH. There is an LED and resistor already connected to PIN 13, so the LED lights up.
delay
The delay instruction just waits for a period of time. The VALUE used with delay is in Milliseconds (1/1000 second). So delay(1000); waits for 1000/1000 seconds (1 second). We'll change that soon.
NOTE: the ";"
Notice that every instruction is followed by the character " ; " which is like a period that tells the end of the sentence.

So, let's change the ON time to be very short. Maybe 50 Milliseconds. So change the first delay statement to:
delay(50);
Each time you make a change, click upload

which will first Verify and Compile your program and then send it to Arduino. Notice that each time you do this the LEDS flash that are marked "Tx" (Transmit) and "Rx" (receive) as your main computer communicates to the Arduino.

Try some other combinations of ON and OFF times. Like ON 1000 and OFF 50. We can still see the short OFF time blink.

Try making both ON and OFF times shorter and shorter. If you make the ON and OFF times short enough your eye will no longer see blinking, because of "Persistence of Vision" (W) which happens when there are more than about 25 blinks per second. So, hmmm.... if you make the LED be ON for 1/50 of a second and OFF for 1/50 of a second that should do it. So try 1000/50= 20 Milliseconds. Put 20 for both the ON and OFF times. What do you see?? Younger eyes will see some blinking effect. How about 10 Milliseconds each?
Pulse Width Modulation: 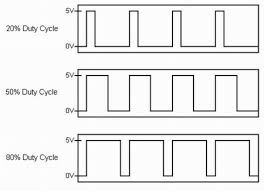 This idea of turning an OUTPUT on and off rapidly can be used to dim lights, control motor speeds and so forth, even though a DIGITAL OUTPUT can only be a 0 (OFF, or LOW) or 1 (ON, or HIGH). Later you will see how Arduino can use these for dimming, speed control and more. Change the delays back so you have 10Ms ON and 10 Ms OFF Notice how bright the LED is. Now change the ON time to 1 Ms. Upload that. Is it a lot dimmer? It is on only about 10% of the time and your eye sees it as dimmer. Arduino can change the On to OFF ratio itself without you programming it. Later we'll try out PWM.

OK, your Arduino is working, you are programming, so now let's jump to another page and start hooking up your "Electronic Bricks". (ELECTRONIC BRICKS: HERE)
Retrieved from "http://arduinoinfo.mywikis.net/w/index.php?title=Electronic-Brick-Homepage&oldid=120265"
Category: