ABOUT ERECTOR SETS AND SONGS

When I retired from IBM some 24+ years ago, I told a few stories about amazing people I had met and whom I had a chance to talk with. In retrospect, they had a great influence on my fascination with designing things. They included Willy Ley, Buckminister Fuller, Isaac Asimov, Dick Landers and A.C. Gilbert. This was one of the stories:

The Old Man was a character alright, even at 10 years old (1950) I knew that. He drove his jeep around the game preserve in our town, with his hound dogs waving back and forth in unison in the back. Sometimes he gave us a ride.

My friend Mark Landers was only 7 but he was as crazy as I was about building stuff. We got Good Junk everywhere. The farms in our neighborhood had barn yards with lots of old rusty machinery, and an old orchard had lots of old junked cars. We had wrenches, and a hammer.

Marks's father, Dick Landers (Sales Manager of A.C. Gilbert) built model boats with real engines like the old Ohlsson 60. And he let us use his tools. He worked for the Old Man at the Factory in New Haven. We got to go there on Saturdays. 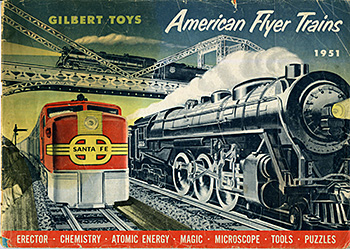 On the weekends there were no workers in the factory. The Old Man was puttering around the place everywhere. He let us do lots of stuff. He was kinda gruff, but he didn't seem to mind at all that we were just kids. He never said he wanted to teach us anything. He let us weld stuff with the spot welder, and dust powdered metal into the stamping press that made the wheels for the American Flyer trains. BAM! There was a perfect bronze locomotive wheel. You could break them with your fingers before they went thru the sintering oven. Of course we got to run the biggest American Flyer train layout ever, in the showroom! But what we really loved was all those bins of PARTS back in the factory. Parts to build Erector Sets, parts to build American Flyer Trains. After we started exploring the bins, we never ran the trains in the showroom anymore.

"Hey, kid, What's this??", the Old Man would say, as he reached into some bin. Out would come something like the armature for a diesel railroad engine. We built some train trucks (just the wheels/motor part) up out of parts. They went like hell just by themselves on the track. Eventually we had a rollercoaster track in Mark's room. We told the Old Man we knew why he called them American Flyer after we put two transformers in series on them in Mark's Room.

He and Dick looked at each other and laughed. Mark said he knew why the Old Man's name was A.C. too. They laughed a lot at that one!

It took years before I realized how much some people had gone out of their way for me when I was a kid! I'll never expect kids to realize it now, either. 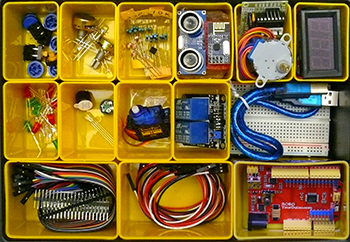 Now, at 82, I run a company based in China, from Vermont, that provides kits and parts for schools and hobbyists interested in Arduino Microcomputers, Robots etc. I recently realized that those kits are SO much like the Erector Set that A.C. Gilbert patented 100 years ago. You open up the box, and people say "What does it DO?". Umm... They don’t DO anything. Until You BUILD things with them. Wow.

I love answering the questions and writing the How-To on http://ArduinoInfo.Info and sending stuff to kids in Cambodia, VietNam, Europe and the USA.

No Doubt about the connection... 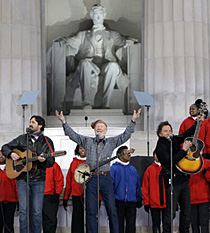 And now (2018) I also want to talk about a guy who taught me so much about working with young people and just ... being there for them.
I have known Pete Seeger and been a "Fan" for about 40 years, since I lived and worked in the Hudson Valley in the 60's and 70's. I was fortunate to work with Pete a few times on concerts and benefits and school visits, back in that day. In the 80's, we crossed paths working the Champlain Valley Festival in Vermont. One year he sang with his Grandson, Tao Rodriguez Seeger, who in later years I have known as a member of The Mammals, along with Ruth Ungar and Michael Merenda. One of Pete's gifts to the entire world of music has been his unflagging help and encouragement to young musicians everywhere. At the Obama inauguration, Pete sang "This Land Is Your Land" with many thousands of people, with Tao on his right and Bruce Springsteen on his left.
But the outstanding things about Peter Seeger were not his concerts. They were the things he's DONE with and for people, especially young people.
Pete loved to tell stories, and I have a story to tell about him:

Back in the late 60's I worked for Radio Station WALL, in the Hudson Valley of New York. There was a lot of concern about young people, in that era of Vietnam Protests, the Newburgh, NY riot, drugs and other social issues. Social action groups created a Youth Clubs organization, and I led a Radio Club of aspiring performers, DJ's and Sound Engineers.

In the Spring of that year, the various clubs came together to present a community talent show, and Peter Seeger was invited to participate. He agreed, and we assumed he would sing as a headline act and just walk in and play, but about 4 O'Clock Pete ambled into our rehearsal at the High School, his sleeves already rolled up.

Pete helped my group, moving speakers around, and patiently worked with 2 or 3 different musical groups, listening and making suggestions, and singing an example harmony over and over again with a young girl.

A teenaged boy named Don* was going to play "Yellow is the Color of my True Love's Hair", in the style of Donovan.. He came out and my kids set up two mikes. Pete taught them how to place the guitar mike so that the performer could move a little without hitting it, or moving off mike. The kid rehearsed his song, which went OK, but his playing had the same strumming, with little variety. Pete gave him a hint about holding the end of phrases a little stronger.

Time flew, and it was 7 PM and we were closing the curtain and everyone was getting nervous and milling around backstage. One of my kids came running over and said "Pete says we need one more mike for a couple of the vocals".. I had most of WALL's remote gear with me, and we pulled out another mike and cable and a folding stand. Pete grinned at me from the edge of the stage, as we agreed, wordlessly, that the kids would do everything. The mike was set up in the wings, stage right, and our two Sound Engineer kids checked it out and made some notes, without any help from me.

And so the show went on, introduced by the Mayor and all that.. and the various groups and singers and dancers did their parts. When it was time for the "Colors" song, the kid went out with his guitar, there was a smattering of applause, and he started singing.. At the chorus, I heard a little difference and a little more variety. I moved to my right and peered over the top of the light board. There, on that mike BEHIND the curtain, was Pete with his banjo. The notes rang out in perfect accompaniment with the kid's song ..
"Freedom is a word I seldom use, without Thinkin' .. A Huh!"

In the dim backstage light I could see Pete's head bobbing back and forth, and on his face was a big grin!

We can never pay back Peter Seeger's generosity to the World. It's our turn. Our turn to pay it forward, to our young people and our communities, with whatever talents we have, as Performers, or Engineers, or just plain helpers. The more important and successful and famous and rich and rushed you are, the more you owe. Pete taught us that every time there's something truly important, there's an opportunity to participate, to sing along and work along, together.

So, what about kids today?? Can you stand behind some kids as they learn things? If any of you notice a kid who is really interested in this stuff, in Making Things, especially if they don't have much money, email me and I'll send you a kit you can give to them. Of course that means you'll need to help them out...

Please take this seriously. I mean YOU. I have a whole lot of stuff I need to Pay Forward, and I need your help!
terry@yourduino.com