Having two or more Arduinos be able to communicate with each other wirelessly over a distance opens lots of possibilities:

These are a series of low-cost 2.4 GHz Radio modules that are all based on the Nordic Semiconductor nRF24L01+ chip. 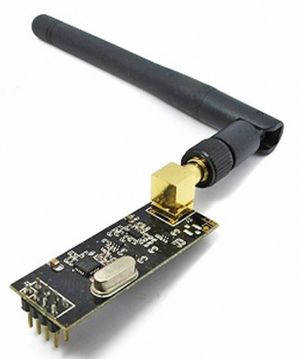 Info from the manufacturer: [1] The Nordic nRF24L01+ integrates a complete 2.4GHz RF transceiver, RF synthesizer, and baseband logic including the Enhanced ShockBurst™ hardware protocol accelerator supporting a high-speed SPI interface for the application controller. The low-power short-range (50-200 feet or so)Transceiver is available on a board with Arduino interface and built-in Antenna for less than $3! There is also a high-power version (right). 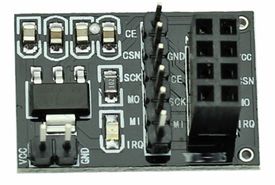 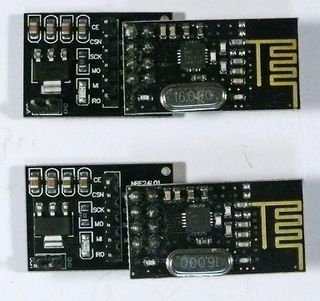 Examples of Arduino to nRF24L01 Connections (Pin Table with colors below): 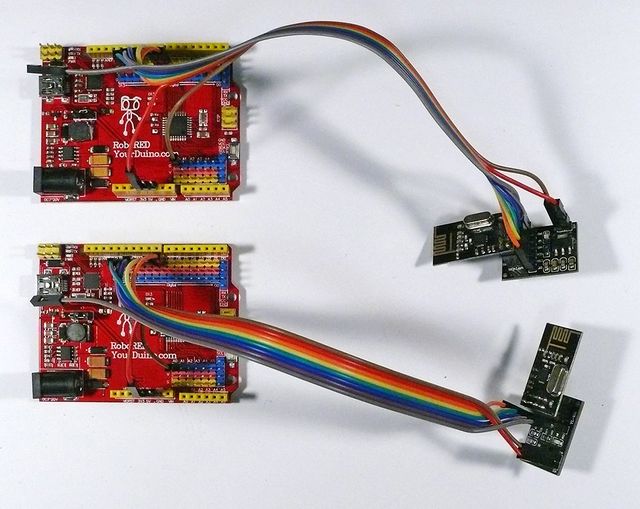 NOTE! If using the Base Module, power it from 5V not 3.3 like in these photos... 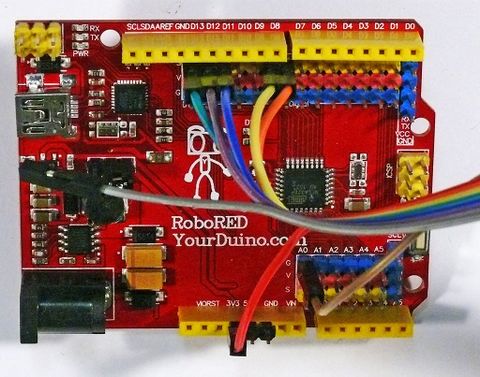 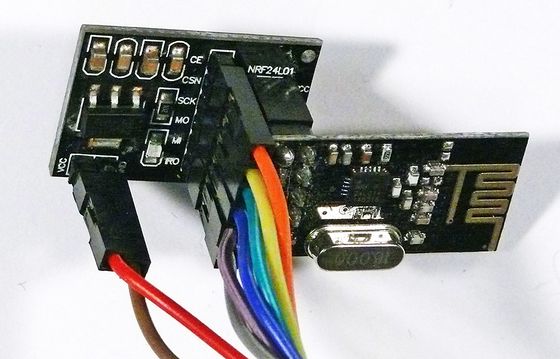 NOTE! If using the Base Module, power it from 5V not 3.3 like in these photos...

Many users have had trouble getting the nRF24L01 modules to work. Many times the problem is that the 3.3V Power to the module does not have enough current capability, or current surges cause problems. Here are suggestions: 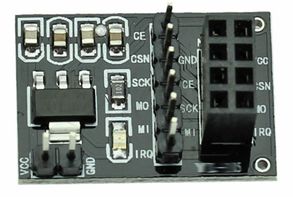 These instability problems are particularly noticeable when 3.3V power comes from a UNO, MEGA, Nano etc. that has only 50 ma of 3.3V power available. Newer boards like the [[3]] have 350 ma or more available and can run even the high-power modules directly.

nRF24L01 SOFTWARE AND LIBRARIES: (Jump Ahead IF you're ready for that...)

Range is very dependent on the situation and is much more with clear line of sight outdoors than indoors with effects of walls and materials. The usual distance quoted by different suppliers for the low-power version module with the single chip is 200 Feet or 100 Meters. This is for open spaaaaaace between units operating at a Data Rate of 250KHz. Indoors the range will be less due to walls etc... The example with radio.setPALevel(RF24_PA_LOW); will be only 10 feet or so. But reliable. You can do these things to get better range:

We suggest you test two units at your actual locations before making a decision. There are units with an Antenna Preamplifier for the receiver and transmitter power amplifier and external antenna. The range between that type unit and several low-power units will be better than between two low-power units. Every situation is a little different and difficult to get an exact number without actual tests.

[to nRF24L01+ Data Sheet.] You don't have to, but if you want to understand more about what you can do with this "little" radio, download the data sheet. In particular you may want to read pages 7-8-9 ( For Overview and Features), and page 39 (MultiCeiver, which allows 6 Arduinos to talk to a Primary Arduino in an organized manner). Fortunately the board-level products we have take care of many of the physical and electrical details and Antenna Impedance Matching etc., and this library takes care of lots of register initialization and operational details.

There are other types of nRF24L01 modules which add Transmitter power amplifiers and Receiver preamplifiers for longer distances.. up to 1 Km (3000 feet). [them all here.] These modules use an external antenna which can be a simple directly-attached one or a cable-connected antenna with more gain or directivity. Here's what some of these look like: 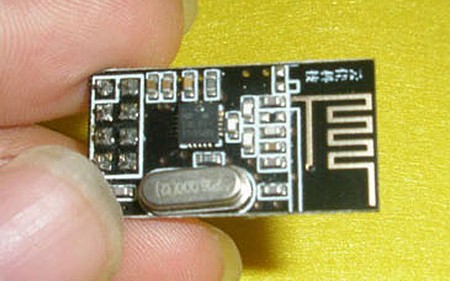 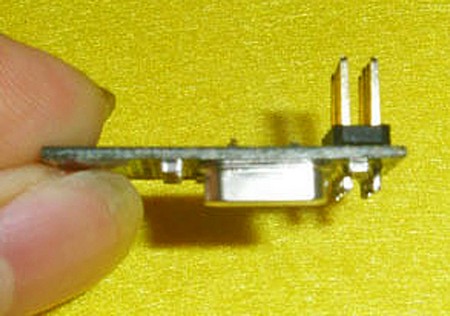 Above is the low-power version, with it's built-in zig-zag antenna. On the right you can see the pins sticking down (up in this photo) that connect to Arduino. Later we will show the pinout. **NOTE!! Different Libraries use different pinouts from nRF24L01 to Arduino!!**

Above is the version with Transmit Power amplifier and Receive Preamplifier. Our low-cost antenna is on the unit in the middle. The same 8 pins connect to Arduino and the base module. Same software is used. On the right is the antenna connected with a 3M cable. Connectors are "Reverse SMA".

You might find a similar cable [[4]] Here's a [to a Home-Brew antenna design:]

Transceivers like these both send and receive data in 'packets' of several bytes at a time. There is built-in error correction and resending, and it is possible to have one unit communicate with up to 6 other similar units at the same time. The RF24 Network Library extends this to multiple 'layers' of interconnected transceivers.

These amazing low-cost units have a lot of internal complexity but some talented people have written Arduino libraries that make them easy to us. They all use the same pinout as shown in the following diagram, which is a TOP VIEW (Correction!):

NOTE: These units VCC connection //**must**// go to 3.3V not 5.0V, although the Arduino itself may run at 5.0V and the signals will be OK. The NRF24L01+ IC is a 3.3V device, but its I/O pins are 5 V tolerant , which makes it easier to interface to Arduino/YourDuino. Arduino UNO and earlier versions have a 3.3V output that can run the low-power version of these modules (See Power Problems at the top of this page!), but the high-power versions must have a separate 3.3V supply or use a Base Module with a 3.3V regulator. The [RoboRED] has a higher power 3.3V regulator and can be used to run the high-power Power Amplifier type module without a separate 3.3V regulator.

We will show an example of transmit and receive software below, and there are many examples on the RF24 Library download page. You will need a library of software to run the nRF24L01 radios. There has been a progression of improvements to the RF24 libraries by many people. TMRH20 (Who IS he/she, anyway??) has done a great job on the current library and network additions. There are lots of details but you can ignore many of them that the library will take care of.

Get TMRh20's excellent RF24 Library that supports both Arduino and RaspberryPi:

** NOTE!! If you have an earlier version of an RF24 Library, COMPLETELY REMOVE IT and install this version. **

Read about it and Download it [HERE:] (Click "Download ZIP" on the upper right of the page) Read the detailed documentation [HERE] Read his BLOG with advanced projects [HERE] Once you have downloaded the ZIP, you should see a folder called RF24-master.ZIP. Change the name of this file to just RF24.ZIP. Double click on the ZIP and you should see a folder inside also called RF24-master. Rename this to just RF24 as well.

Then see our page about installing libraries [HERE:] When you have the library installed, you can run some examples. A ways below we discuss the individual commands (methods) in the RF24 Library and show how to use them to make a simple transmit-receive system. But to get you started we suggest you start with one of the Examples in the RF24 Library from TMRh20. See this page:

[EXAMPLES] When you install the RF24 library, those examples are loaded on your computer. You don't have to download them.

NOTE! If using an Arduino MEGA:

This works fine with Arduino MEGA. You just have to add the instruction line (in the setup line): pinMode(53,OUTPUT); So all examples given in this website or with the library will work with wiring to pins 7 and 8 like indicated, just add the OUTPUT mode for pin 53 (SS) when using Arduino MEGA.

We suggest you start with, um, "GettingStarted".** You need to set up two arduinos, with two nRF24L01's like in the photo above. Separate them by 5 feet or so, though. . You can run two instances of the Arduino IDE on the same machine, with two nRF24L01's on separate USBs with separate COM#. I suggest this sequence:

You can run some other examples, but when you want to understand the RF24 library and it's Methods better, see the section below.

The reader will find more details and additional examples here

We will try to understand the commands to set up and operate an nRF24L01 radio and build a very simple working example. First we will look at the minimum needed to set up and transmit or receive data. Later we will write more complete examples and get them working with real radios..

CREATE AND START UP A RADIO (For either transmit or receive):

// **NOTE**: In all following commands, you must use the same identifying name you used in the RF24 statement that created the radio. ("**myRadio**" in the example above) You will use that identifier followed by (dot) followed by the method (command), followed by parameters. This is "object oriented programming". The OBJECT in this case is the Radio, and there are many METHODS that can operate on the Object. A METHOD is much like a Function or a Subroutine. //

//**myRadio.** **startListening** (); Turn on the receiver and listen for received data. You MUST have opened a reading pipe FIRST. //

We have written working examples of Transmit and Receive sketches using these methods. See them HERE

SET SOME OTHER OPERATING OPTIONS AND PARAMETERS:

NOTE: Many of these methods have default values you can usually use.

Prints out a LOT of debugging information.

This is the same unlicensed band WiFi operates in (WiFi uses 2.400 to 2.500 gHz). Usually frequencies above channel 100 are best.

You can scan the channels in your environment to find a channel that is clear... See this Scanner sketch.

Enable custom length payloads on the acknowledge packets. Ack payloads are a handy way to return data back to senders without manually changing the radio modes on both units.

Set the number and delay of retries upon failed transmit. P arameters:

//NEWS: RaspberryPi is now supported! I need to show a working example... Phew..//

RadioHead: A very full-featured Library with support for may different radios, not just nRF24L01:

[is another good How-To example ]from Robin on arduino.cc