Physical Computing is quite different than writing software for personal computers where the only physical inputs are the Mouse and Keyboard. With Arduino you can connect and control literally hundreds of different devices, and write software that creates new Intelligent Devices. We can see how this goes together here: 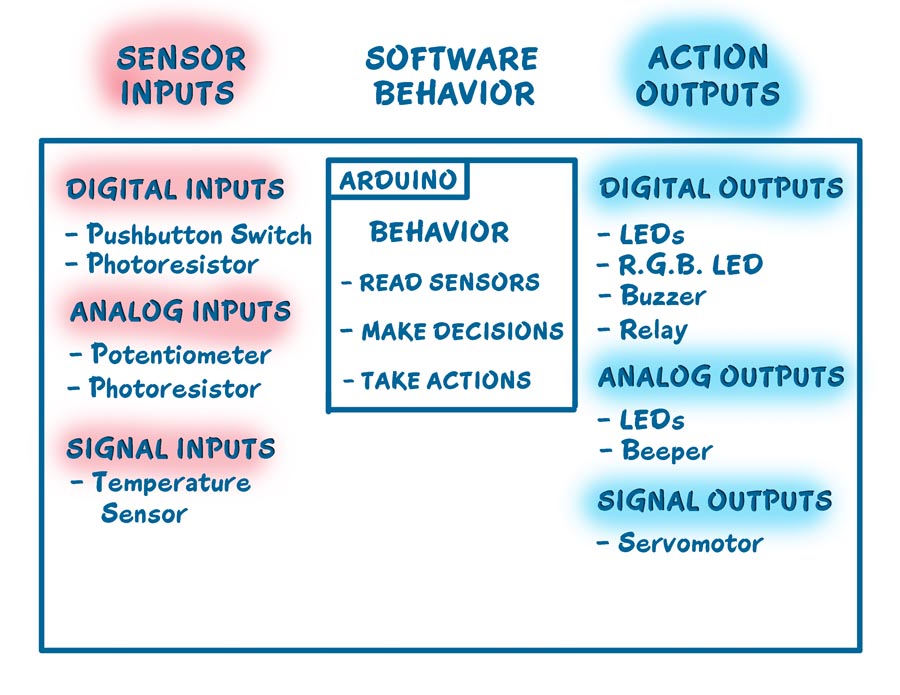 SENSOR INPUTS: On the left are examples of some of the Input Devices you can connect.
ACTION OUTPUTS: On the right are examples of Output Devices you can control.
SOFTWARE BEHAVIOR: Here is where you write software (called SKETCHES in Arduino) that makes decisions about what things are sensed with Input Devices, and what actions will be taken with the Output Devices. This may be as simple as sounding a buzzer when a switch is closed. 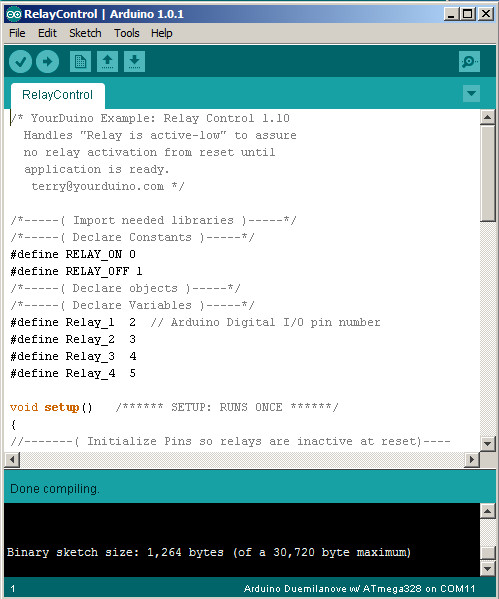 On the left is an example of the Arduino IDE window:

More details of using the IDE are in another section of the ARduinoInfo.Info WIKI.

If you haven't written "code" in any computer language yet, you'll have to get used to writing very specific commands to get things done. But Arduino gives you many easy to use commands. Many people can help you with Arduino. SEE [help from Nick Gammon]

To turn an LED ON for example, you'd write something like:


digitalWrite(led, HIGH); // turn the LED on (HIGH is the voltage level) and to turn it off again, you'd write:


digitalWrite(led, LOW); // turn the LED off by making the voltage LOW
Now look closely at those lines:

Verify is Fussy, Fussy! If you misspell something, forget the ";", or use unknown words, it will put out Error messages and try to tell you which line is the problem.

Lots more about using the IDE and writing software Sketches on other pages of this WIKI.

When you start writing Arduino software Sketches, you are not in a room alone. You are in a Library, with many pre-written examples that make it easy to use more complex functions like connecting to the Internet. Here are the Standard Libraries that come with the free IDE software install:


One of the greatest advantages of Arduino is the worldwide community of thousands of people who are using it. Arduino enthusiasts who have figured out how to do more complex things have shared their work by creating Contributed Libraries. Some of the categories of libraries are:

See the details on the Arduino site here: And when you figure out something cool that other people could use, see the Tutorial on that page about writing your own libraries.